Candy put pen to paper  and came up with some amazing songs in 2020.

Facepaintium Perfecto! Now your magic mug will really look wizard, as you can apply your makeup with wands that could have come straight from Ollivander’s, if Ollivander had been more interested in fashion then levitation and lighting spells.

Storybook Cosmetics, a company run by triplets in Omaha who see a correlation between the sparkling of a magic spell and the glitter of the runway, don’t technically or legally call their products “Harry Potter” anything. But it’s like selling a lipstick inspired by a “space laser sword”; you know where the idea took root.

The brush set, which you can preorder now, comes with five wand-brushes, all with “magical metal handles.” Included with the set is a custom velvet pouch for safekeeping.

Ron Whiteis a calm, cool and collected comedian when he’s onstage, but if you vandalize his tour bus in the middle of the night … he becomes a half naked maniac who’ll chase you down with a golf club.

TMZ got this photo of White apparently coming after a guy who was doing the dirty deed. Underwear? Don’t care … and we’re told he pulled a gap wedge out of his golf bag, Elin Nordegren style.

As we reported … a man was arrested after he sideswiped Ron’s bus with his truck. The guy was cited by cops, but he became enraged and started kicking the bus, denting it.

Ron wasn’t having it, and summed it all up to us like this … “Don’t (expletive) with me when I’ve been drinking.”

“American Horror Story” will return for Season 6 on Wednesday, September 14 at 10 p.m. No word yet on the theme for this season of the horror anthology, which recently revealed a mysterious teaser image. Cast members Lady Gaga and Cheyenne Jackson have hinted that they will both return for the new season, alongside series mainstay Sarah Paulson. This story lovingly borrorew from Variety. Read more here:

New Jersey newlyweds got an unexpected gift at their wedding reception: a performance by Taylor Swift. Taylor played a stripped down version of her song Blank Space at Max Singer and Kenya Smith’s reception (in Long Beach Township) on Saturday as amazed guests looked on and sang along. Taylor agreed to attend after getting a letter in April from the groom’s sister. She wrote about how her brother was a huge fan and how he and their ailing mother had danced to Taylor’s song after the newlyweds were married in a hospital room. The groom’s mother died shortly thereafter. Taylor had contacted the groom’s sister and they planned the surprise visit. 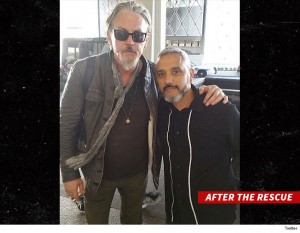