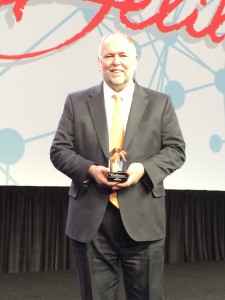 Dave Hoxeng receives the Crystal Award at the NAB in Las Vegas.

NAB Crystal Radio Award finalists were chosen by a panel of judges representing broadcasting, community service organizations and public relations firms. Finalists were honored and winners announced at today’s NAB Show Radio Luncheon, where Global Lead for Business Development and Partner Management of the Ford Developer Program at Ford Motor Company Scott Burnellpresented a keynote address, and nationally-syndicated radio personality Delilah was inducted into the NAB Broadcasting Hall of Fame. The luncheon was sponsored by ASCAP.

About NAB Show
NAB Show, held April 22-27, 2017 in Las Vegas, is the world’s largest convention encompassing The M.E.T. Effect, the convergence of media, entertainment and technology. With 103,000 attendees from 166 countries and 1,700+ exhibitors, NAB Show is the ultimate marketplace for solutions that transcend traditional broadcasting and embrace content delivery to new screens in new ways. From creation to consumption, across multiple platforms and countless nationalities, NAB Show is where global visionaries convene to bring content to life in new and exciting ways. For complete details, visit www.nabshow.com.

About NAB
The National Association of Broadcasters is the premier advocacy association for America’s broadcasters. NAB advances radio and television interests in legislative, regulatory and public affairs. Through advocacy, education and innovation, NAB enables broadcasters to best serve their communities, strengthen their businesses and seize new opportunities in the digital age. Learn more at www.nab.org.

Create your own user feedback survey

Family makes everything so much better.

Chris Pratt praised wife Anna Faris on Instagram Monday for joining him on his press tour in Tokyo, Japan for his upcoming Marvel sequel Guardians of the Galaxy Vol. 2. They were joined by their 4-year-old son, Jack.

“Thank you for the support honey!” Pratt, 37, wrote. “You look so beautiful. These press tours can be such a whirlwind. I’m grateful to have you and the boy with me on this one.”

The “Big Short” writer announced last year he’s planning to take on the former vice president’s story and now we have the first rumors of actors linked to the movie.

Christian Bale is in talks to play Cheney, according to the Hollywood Reporter, while Steve Carell could play Secretary of Defense Donald Rumsfeld. Both actors starred in McKay’s “The Big Short.”

Amy Adams is rumored to play Cheney’s wife, Lynne, who he met when he was 14.