Johnson Beach… why you should celebrate it on April 17

Annual event celebrates the life of Pfc. Rosamond Johnson, who was killed in the Korean Conflict at the age of 17 while attempting to save the lives of three fellow soldiers

PERDIDO KEY, FLA. (April 17, 2015) — Pfc. Rosamond Johnson Jr. was only 15 years old when he enlisted in the U.S. Army. At 17, he saved two lives before losing his own life in the Korean War. Johnson, a light weapons infantryman from Escambia County in Florida, had already pulled two wounded fellow soldiers out of the line of enemy fire, and was returning to save a third, when he was fatally wounded at the 38th Parallel, which separated North Korea and South Korea. He was the first African-American soldier from the Pensacola Bay Area to be killed in the war, and is renowned for his heroic sacrifice.

Rosamond Johnson Day will be celebrated Saturday, May 2, at his namesake, Rosamond Johnson Beach, on the Gulf Islands National Seashore in Perdido Key. Tributes to Johnson will begin at 10 a.m. at the Star Pavilion as community leaders, pastors and Johnson’s family members will speak about his life and his valiant heroism. The public event, held annually on the first Saturday in May, will conclude at about 1 p.m. Park fees will be waived for those attending.

“It is so critical for young people to know the history surrounding where they grew up and to feel like they have a foundation, especially for a place that is known more for beach balls and fun and sand,” said Alison Davenport, who was instrumental in setting up the official celebration and making it an annual event.

Davenport is the former chair of the Perdido Key Chamber and Visitor Center board of directors, and her daughter grew up playing on Rosamond Johnson Beach. She said young people and others need to know the history of the beach and the significance of the young man it was named for.

“Those who come will be moved,” Davenport said. “They’ll leave with the recognition of commitment at a very early age…. To me, it’s about learning your roots and holding on to the meaningful parts, the beautiful parts, of our history.”

Johnson was killed on July 26, 1950, two years to the day after President Truman issued an executive order banning racial discrimination in the U.S. armed forces. Johnson had enlisted in the Army around the time of the executive order. He was awarded the Purple Heart on Aug. 21, 1950.

The Korean War took place during the era of segregation in the United States, at a time when beaches along Pensacola Beach and Perdido Key were segregated. What is now known as Rosamond Johnson Beach was one of the few beaches in the area that were open to African-Americans during segregation.

After the Korean War, the county-owned beach recreation area was named after Johnson, at the suggestion of the Sunset Riding Club, which leased the land for the use of bathing, beach and recreational facilities for “colored citizens.” The lease ended in 1956, but the name Rosamond Johnson Beach stayed, to honor Johnson’s life, heroism and valiant sacrifice for his country. The beach became part of the Gulf Islands National Seashore in 1973.

A monument honoring Johnson was erected at Rosamond Johnson Beach in 1996. The memorial stone reads: “He stands in the unspoken line of patriots who have dared to die that freedom might live, and grow, and increase its blessings.”

Rosamond Johnson’s mother still resides on Belmont Street in Pensacola. She and Rosamond’s brother and sister and other family members attend Rosamond Johnson Day every year to honor his memory and legacy. “It’s a beautiful event … one which few people leave dry-eyed,” Davenport said.

The Rosamond Johnson Day celebration is hosted by the Perdido Key Visitors Center & Chamber of Commerce. For more information and details about this event call 800-328-0107 or visit the website athttp://www.visitperdido.com

Pensacola, called the City of Five Flags because it has been under the rule of Spain, France, Britain, the Confederacy and the United States, has a strong multicultural heritage. Visit Pensacola, the tourism agency for Pensacola, Pensacola Beach and Perdido Key, recently published a multicultural brochure focusing on the cultural heritage, places of interest and events in the Pensacola Bay Area. The brochure is online athttp://www.visitperdido.com/wp-content/uploads/2015/03/150130_2015-MC-Guide.pdf. 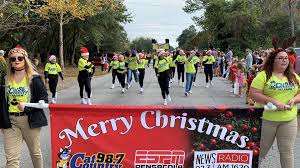 Q: A recent survey says 60% of Americans see THIS as a yearly competition…What?