Carrie Underwood made the call to Brent and Candy to announce that Cat Country 98.7 had won the 2019 CMA Station of the Year!

Pensacola’s locally-owned country radio station, CatCountry 98.7, has been named 2019 Radio Station of the Year by the Country Music Association (CMA). Carrie Underwood called Brent and Candy to announce the win. This is the second time in three years Cat Country 98.7 has won the coveted CMA Station of the Year award.

The CMA Awards will air on WEAR ABC 3 on November 13th at 7pm. Brent and Candy will be broadcasting live from Nashville in the days leading up to the awards show.

Brent Lane says “This incredible honor and recognition from the Country Music Association is a direct reflection on our community. Cat Country 98.7 is so proudly locally owned and operated by Dave and Mary Hoxeng. To be recognized on a national level is a great and heartfelt honor we cherish on behalf of this community.” 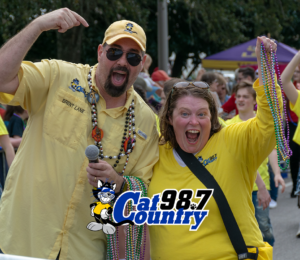