Eight-year-old Laney Brown fought Leukemia to the end, and one of her final wishes was to talk to Taylor Swift. Last week, Taylor made her wish come true when she called her on her birthday (Friday, December 20).

Taylor called Laney via Facetime so that they could see each other during their conversation. A message posted on her Facebook page said her conversation with Taylor was a very unforgettable moment for her. The message said, “Laney was so nervous to talk to her because she is such a ‘famous celebrity’. I was actually worried that when Taylor Facetimed her that she would be too scared to talk but Taylor was fabulous!! She really engaged Laney in conversation. Laney lit up and had a huge smile on her face. I can’t thank Taylor enough for taking time out from her family to make Laney’s birthday very memorable. We will hold that memory in our hearts forever.”

The next day, tshe got even more support when thousands of people gathered outside of her hospital window to sing Christmas carols.

CNN says the crowd grew to about 10,000 pduring the night. Although she was too weak to go to her window to see the crowd, she did hear them sing and had this picture posted to her Facebook page:. 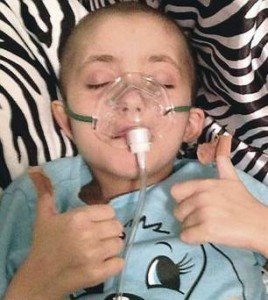 Laney was diagnosed with acute myeloid leukaemia in May. Last week her family were told she only had weeks to live. She died at 3:10am Christmas Day.