Being ‘Touchy’ A Touchy Subject With Justin Moore

Even though Justin Moore denies being a germaphobe, you get the impression that he is, kind of. For example, when he goes to Vegas for the ACM Awards in April, he says he won’t be wading into the hotel pool.

Among the other things that bother the ACM New Artist Finalist are what other people may have left behind in the water. “Band-Aids. You know, you’re swimming around, there’s somebody’s Band-Aid that fell off. I mean, they had it maybe around their ingrown toenail or something,” he says. “I can’t do it.”

“I won’t drink out of water fountains either.” Also on his “no” list, touching anything in the bathroom, which he admits can be a challenge at times because of his height. “In the bathroom, like the urinal, I kick the flusher, the handle. I don’t touch it with my hands, yeah, unless it’s real tall and then obviously I can’t reach it. My legs are not the longest in the world, but [I] do the elbow thing.”

Justin wants you to cast you (clean) vote for him for ACM New Artist of the Year at VoteACM.com starting March 24th . The Academy of Country Music Awards will be handed out April 6th on CBS. 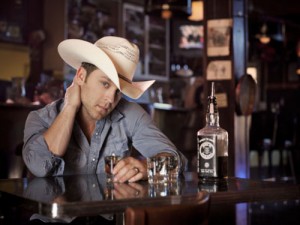