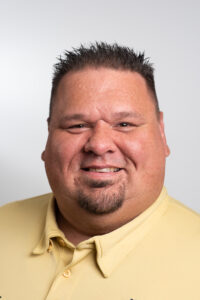 Here is how the conversation went for my profile:
Boss – Moose, you need to write a bio for the website!
Me – People actually read these things?
Boss – Of course they do! But it’s probably because they clicked
the wrong button…

Well, here are a couple things about me. Born Dec. 29, 1984 in Falmouth, MA at 11lbs 9oz and 23 inches long, yes, a big baby. My family moved to Tallahassee in 1997 – Pensacola has always been sort of a second home to me. It was not uncommon to hop in the truck on a Friday after school, drive over, crash at a friend’s house for the weekend, then go home on Sunday afternoon.

I’ve wanted to work in radio since I was a little kid. Talking, music, and a paycheck; how could it possibly get ANY better?

I am the sports fan that knows enough to be dangerous but doesn’t know so much that you wouldn’t want to talk sports with me. I have a love affair with the Red Sox and Seminoles. I love me some NASCAR and understand what they mean when they refer to tight, loose, and fuel strategy. I’m excited to dive into the fandom of the Wahoo’s, Ice Flyers, and Argo’s!

Finally, I’m married to an insanely awesome, Tallahassee born and raised young lady. Erin has been by my side since the beginning of this CRAZY radio journey. We met in November 04, got engaged in November 05, and were married in November 06. After years of trying and a few bumps in the road – we got the best news I could ever imagine; on June 20, 2010 (which was both Erin’s birthday and that year, Father’s Day) we found out we were pregnant! On February 3, 2011 – after 21 weeks of bed rest, and still a month early, I got to meet an AMAZING baby boy who we named Carson – But watch out, he’ll be quick to correct you and let you know his name is Lil Moose…